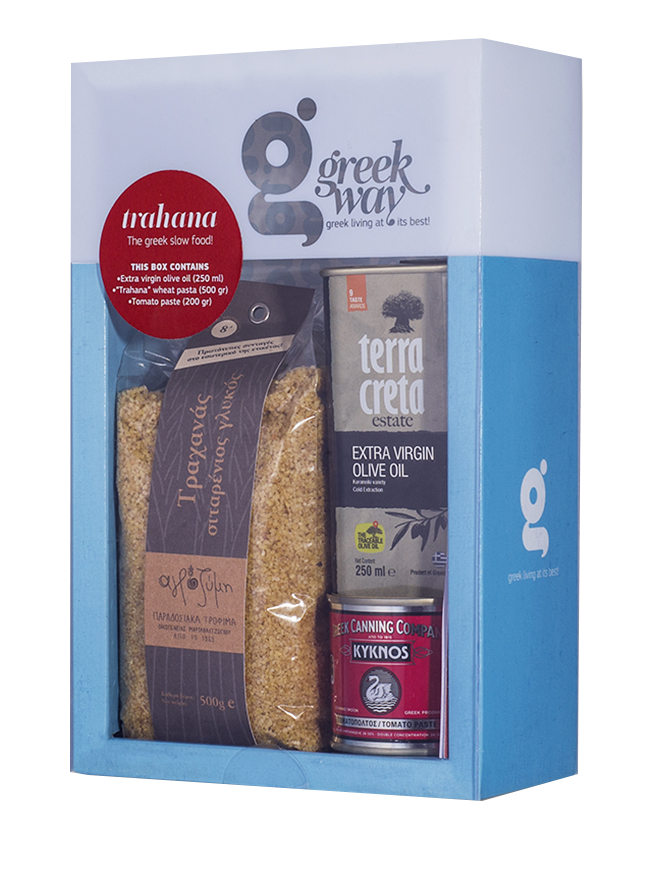 Trahana is a type of pasta made from wheat and milk.
Women used to start preparing it during the first months of summer so that it could dry and be packaged in time of winter.
With its very long shelf life as a main advantage, trahana has a special place among the most nutritious products of traditional Greek cuisine.
Trahana is characterized by a very low calorie and fat content. Its nutricional value is similar to that of meat.
Trahana is cooked as a soup and the way it is prepared has remained the same since ancient times.

The box contains:
-Extra virgin olive oil PDO from Sitia, Lasithi Crete. A region that is globally recognized and awarded for the quality of the olive oil which is produced there.
-Wheaten sweet trahana of high quality from the Macedonian land.
-Traditional tomato paste.

All this accompanied by an easy recipe to live the Greek way experience at it’s best.

Preparation
Put water in a pot with the tomato paste, the diced tomatoes, salt and pepper. After the mixture comes to a boil, add the olive oil and the trahana. Stir periodically, adding water if necessary and let boil until the soup thickens. At the end, add cubes of feta cheese.

TIP. In order to preserve its nutrients, add olive oil at the end, after cooking